The picturesque town of Zlatograd located amidst the beautiful Rhodope Mountain is one of the few remaining places in Bulgaria where one can still get a firs-hand experience of the traditional culture of Bulgarians and literally "taste" it. Just a stone's throw away from the sandy beaches of Greece and about 300 km from the Bulgarian capital, Zlatograd offers us a romantic and almost fairytale return to the past.

In Zlatograd one can enjoy a stroll through the charming cobblestone streets, drink coffee prepared on sand, try the traditional Rhodope cuisine or witness the knack of the skilled craftsmen in their workshops, which are part of the ethnographic area here. Culters, goldsmiths, saddle makers, potters, tailors... They all shape the tourist scene of Zlatograd today.

Of particular interest in the ethnographic complex of the Rhodope town is Nina Cholakova’s weaving worshop. Having emerged some 10,000 years ago, weaving was the only way to produce clothes in Europe until the first textile mills appeared in the 18th and 19th centuries. The weaving skills of Bulgarian women were passed down from generation to generation in the family, and over the years were brought to perfection.

Weaver Nina Cholakova welcomes every guest in her workshop in the old town of Zlatograd with a wide smile and eagerness to talk and show her craft. Nina is an accountant by profession. About 12 years ago, however, along with her husband Nikolai, a textile technician, they decided to dedicate themselves to the ancient craft by introducing it to tourists. Unlike the modern textile industry, Nina works with completely natural materials, she explains in an interview for Radio Bulgaria. Here is more from her:

"Our goal is to show the craft as our ancestors used to practise it. Because of the difficulty in finding cotton, they used to work mostly with wool. Silk was also not widely distributed. Today, it is even more difficult to find real yarn. We bring ours from the town of Sliven (Southern Bulgaria) and our cotton threads arrive from Kazanlak (Southern Bulgaria). Cotton keeps the fabric firm. Now, when we tell young people that we make fabrics for clothes here, they look at us in astonishment. They think that their T-shirts popped up in shops just like that. And they are not attracted to this activity and I do not know if there are still specialized schools. Some time ago we had a school and a weaving mill, but they have long since closed. Unfortunately, we don't have many followers. And so the craft will gradually die out. No one maintains a weaving loom or weaves at home anymore. There are also no raw materials because people no longer raise sheep for wool. Once even goatskin was used. People used to make rugs out of goatskin, put them on the ground and sleep on them. Goatskin does not absorb moisture and is hard to inflame. And our ancestors used to sleep on the floor, on earth and mud, near the hearth. Shepherd's cloaks were also made of goatskin to protect them from the rain.”

In addition to showing tourists what a weaving loom is and how it is handled, Nina makes a variety of items that can be used in everyday use: cushions, slippers, towels, rugs, bags...

"Tourists find them appealing and buy them readily," Nina explains. "And lately, the interest in old customs has been revived. People started going to folk fairs dressed in traditional costumes and are looking for something where to put their belongings, which will also suit their costume. Others open folk-style taverns and need small cushions for the seats or hand-woven rugs for the floor. There are no items that have remained on the shelves for more than a week or two. But it is physically impossible to get more output. For example, it takes three to four hours to make a small rug just one metre long.”

Many museums and art galleries offer virtual tours on their internet pages during the COVID-19 crisis and the state of emergency. Thus, users can see and enjoy their rich collections of paintings and artifacts while staying at home... 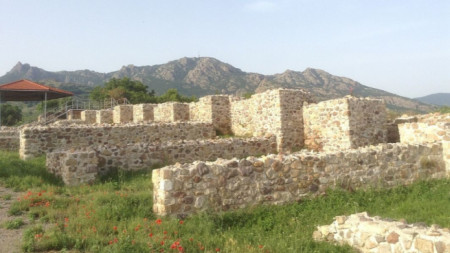 “On the way to the sea we spent a wonderful day in Sliven, known as the city of the hundred voivodes. One of the most interesting places we visited there was the late antique and medieval fortress Touida."- this is probably how a tourist would.. Hisarya is a year-round resort thanks to its climate, mineral springs and archeological sites, which are very well preserved. Here you can see the best preserved fortress wall in Europe and Roman baths, where mineral water is still flowing..